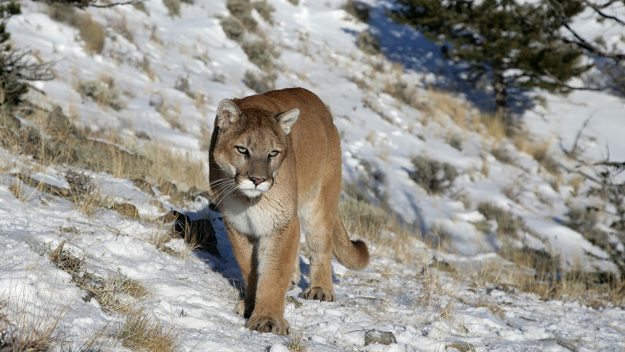 8-year-old Pike Carlson was walking down the hill in his backyard to talk to his neighbor when a mountain lion suddenly attacked him.  Pike was outside his home in Bailey, Colorado playing with his brother when he decided to chat with a neighbor before it turned very dangerous.  As he was walking, a mountain lion very suddenly attacked Pike.  He was knocked to the ground and started searching for anything on the ground he could use as a weapon.  Pike later said, “I was just punching, trying to grab anything that I can.  I did find a stick and I tried to get it in the eye but the stick snapped.”  While Pike was struggling to fend off the lion, his brother, Gage, ran to get their father.  Ron Carlson grabbed a knife and arrived to see his son’s head in the lion’s mouth.  Pike was pinned underneath a tree and couldn’t get free of the lion’s hold on him.  After what seemed like a very long time, Ron was eventually able to scare the mountain lion away.  When Ron finally saw Pike’s face, it was covered in blood.  “The whole side of his face was open,” he said about his son.  “There was blood all over him.”  According to Colorado Parks and Wildlife, the lion that attacked Pike was a 1-year-old male.  This lion, along with a second male lion, was put to sleep after wildlife officials found them near the carcass of a domestic goat the lions had killed.  The agency was sure this was the lion that attacked Pike because the hair matched.  Hair samples were taken from Pike and his father and matched with tissue samples from the lion.  The mountain lion was put down because it was dangerous to humans, livestock, and pets.  So far, Pike has undergone two surgeries and may need a third to repair part of his eyelid.  Pike has kept a positive attitude saying, “No one try to wrestle a mountain lion.  It is a cheater.”