The Non-Traditional Season of Marching Band 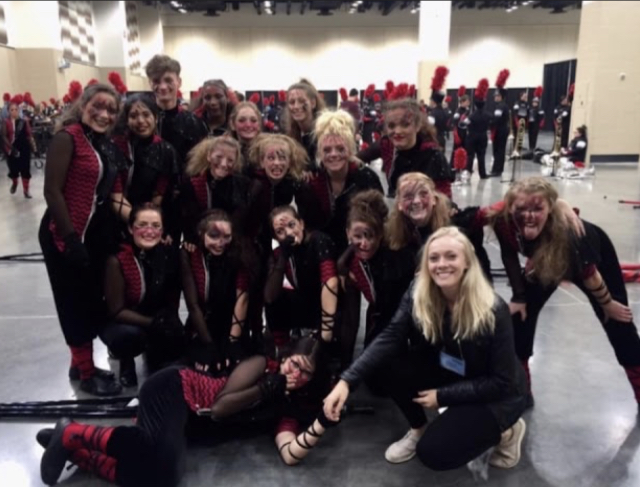 Midsummer of 2020, KMEA decided that the 2020 season would not be competitive. The bands would not be able to interact with other bands or their own members. Mr. Stone had planned that this year would be a non-competitive band before they had canceled the season, the band was still going to practice and perform while still following the COVID-19 precautions. Band camp was cut down on the number of days, but halfway through the band had to stop completely. At the end of September, Mr. Stone was given permission to start the marching band back up. The season would only be during the month of October and they will only get to perform at three football games.

If the marching band had a normal season, they would have a competition every Saturday until November 14th. Some events that would have happened this year would have been Band Of Americas Regionals the week of the school fall break. They would have also participated in a Midstates Competition at the beginning of October, with the State competition landing on October 31st. Finally, to complete the season off, the band would go to Grand Nationals to try to be the Class A Champion for the third year in a row.

As the marching band season is unable to have a normal season, the marching band is planning to perform at three football games so the seniors can still have some of their last marching band season, and the Bourbon County Color Guard is preparing for their winter guard season in the spring. They hope to be able to complete this school year and win their class championship. Last year’s winter guard was canceled close to the end of the season, each competition that they had gone to they were able to win their class and be bumped up to the next class.

When interviewing Mr. Stone, the band director, he stated that he wanted to be a band director in seventh grade while he was a student at Harrison County and had Mr. Hale as his marching band director. Before that he did not enjoy the band but his mom made him. He then started to learn more about band and asked how he would be able to do this for the rest of his life. After that, he started to invest his time and would audition for everything he could. During seventh grade, he started to write drills for shows and arrange music in high school. He included that new members should stick with it and see it through the end. When asked about his favorite memory, he said the warmups at Grand Nationals in 2018. It was his first band as a band director and everything that happened during the season to that point had hit him. He had achieved everything he wanted to do, the band was young but they worked hard. It was a special moment for him, they then won nationals later that day. Since they aren’t having a normal season, Mr. Stone missed most is seeing the growth of the band. He believes that a lot of band directors get caught up and don’t think they improved at all, but he will look back at videos from band camp and the first competition and see the growth the band has made. When asked about other sports having a season, he was glad that they were able to have theirs. Those sports only have that moment during this time and they don’t do anything else related to that sport for the rest of the year. With the band, they get to have different types of events throughout the year, the color guard will get to have a winter guard during the spring and the band will have concerts, and honor band. He thought it is hard to plan ahead due to COVID-19, he does hope to have events this year. Mr. Stone has stated that he’s already started writing for next year’s show.