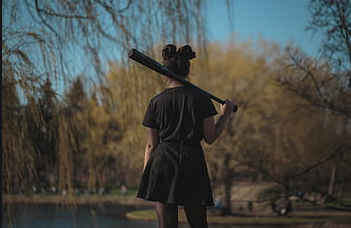 5:30 am, all is still and eerily quiet, she knows she cannot be that early, whereas the area looks like she was the only one in the whole building. Nothing touched by the short woman, besides the random chair in the middle of the room that seemed to freeze by her touch. Her blood-red jeans crisscrossed, knees pressed into the arms of the chair that wished to break. The squeaking doesn’t bother the restrained soul as she listens to the city. People are waking up, or their alarms fail again, again, and again. “Is that another person I detect?” “They did say you were good.” The woman in the pantsuit said once the shorter person revealed that she knew the other was there. “You thought otherwise?” The boss chuckled in response and practically announced to the empty office that working with her is going to be fun.

She rolled over to a random desk as she began to wonder, the desk interesting her. This ought to be the genius’s desk, based on the books and books that this guy must have written. “You do realize that is someone’s desk?” “Stephen’s.” The name surprised her, “Who told you?” “The p h.” She sighs, “Is he annoying?” “You tell me, petal.” Another voice calls out, one that brought a smile to her face, “You must be Step-hen.” “Stephen,’ Snow White, with 4 PhDs.” She chuckles as she proceeds to ponder whether or not to get out of his chair, but seeing him stand there, waiting, just made her want to watch this man break. “Sorry, Atropa belladonna, were you expecting me to move?” She teased after a while, by that point, all of his co-workers came and sat at their desks. They are failing to hide their amusement and interest in their situation, which made the man think of a few words that he wouldn’t dare to say out loud, reputation, and all that. At the end of the day, the fact that all of his friends and family didn’t even bother to try to help didn’t surprise him, the reference to the theorized poison sure did. “Darling, I am just requesting my seat, not asking to be your dinner.” Blood rushed to the woman’s face, who does this man think he is? She won’t admit that the comeback was good, but she won’t stop until she’s on top. Her military training proved that as she is a general, one that is a sniper. They said that it couldn’t be done, she proved them wrong. She is the impossible, not an innocent little flower or a pipsqueak of a princess.

“Sorry to intercept your oddly tension-filled conversion, but we have work to do?” a shortie in glasses states, but as she felt all eyes fall to her, she immediately felt unsure.

Stephen nods and quickly gave the sitting woman the rundown of names and they all got to work, Daisy helping the smartest guy in the whole building with his work because she wasn’t going to get up from the his-now-her chair and they came to a compromise. Soon enough, the newbie and the geek partnership got too loud for the others, and just as quick, it was the two of them alone together, once again.

As the days went on, the more the two were forced to pair together, to the point that being without the other was awkward. The general remembers when she was pulling a Chinese rubber dumbbell, courtney of herself wanting a challenge, over her head, and proceeded to wait to hear how she is doing it all “wrong” and him not doing anything about it or something but nope. She froze when she realized what just happened, she actually wanted him there. It wasn’t like she hated the genius, she just didn’t think how vital his presence was to her. She couldn’t work out for the rest of that day, that revelation got her thinking a lot more than what she is used to. She was is all “feelings” more than anything. She relied on the flips her stomach took that told her that something was wrong, not the flutter of the chest when the dork rambled on and on about the weird things like how long the dead takes to decompose. She trusts the movement in her peripheral vision, but she can’t seem to take her eyes off the way Stephen’s lights up when he found out something that could help our job or the way the dark blue hues stare off the side of the SUV as he tries to wrap his big brain around something.

As it turns out, Stephen was in the same boat as the other as he can’t stand not being able to jokingly flirt and poke fun at the female. He used to flirt with all of his other co-workers as well, but he enjoyed the flush he made on the general’s face way more than anyone else. Logically, he stopped flirting with them and kept at it with the pigtailed woman. Just like her, he didn’t realize how much he needed her by his side. After being shot in his collarbone, the first thing he said was her real name that he only just managed to get weeks before. “Angie…” At the time, he was so terribly desperate to hear her voice and for her to be there that he didn’t notice that the only other person in the room was his younger brother, the only sibling that he didn’t work with. He asked who this “Angie” was but he got no answer to his question as the genius “heavily suggested” that he tell his team that he is awake. The phase, “heavily suggested” will always bring a smile to his face because that was one of the first playful arguments he had with General “Daisy.” Soon enough, even though it felt like an eternity to Stephen, the door to his hospital room was kicked in, the sight welcoming him in. There stood a should-be-panting woman with a bunch of vanilla pudding, both of their favorites. She gave one to the man after helping him sit up, he waits for the thing he never knew he needed, her ranting about how reckless he was and how he needs to be more careful. “You want it now or?” He smiled, completely smitten.