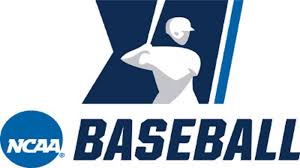 This is a picture of the college baseball logo.

It is that time of year- Spring! Which means that means college baseball is starting. The SEC conference and the Sun Belt conference are starting with normal schedules but having some restrictions. Some of the restrictions are social distancing at all times and having a facial covering on during the game. The Big 12 conference also made the decision to have a normal schedule and play this spring. Some of the best teams are playing on opening day and some of the games are #1 Florida Gators vs # 22 Miami Hurricanes. There is also a College Baseball Showdown at Globe Life Field in Arlington Texas. The teams that are playing in that are all ranked in the top 25 polls. Those teams are #3 Texas Tech, #5 Ole Miss, #6 Arkansas, #8 Mississippi State, #9 TCU, and #12 Texas. The number one team in the preseason polls was the Florida Gators followed by the UCLA Bruins. Now after a few games into the season the Ole Miss Rebels lead the NCAA with a record of 3 wins and 0 losses. They are followed by #2 Arkansas Razorbacks with a record of 3 wins and 0 losses, and #3 is the Vanderbilt Commodores with a record of 2 wins and 0 losses. The record has changed a little since opening day and now Arkansas and they have a record of 7 wins and 0 losses. They are followed by second-ranked Vanderbilt with a record of 6 wins and 1 loss.

The College Baseball season is starting. At the beginning of the season, the #1 team in the Top 25 polls was the University of Florida then #2 was the UCLA Bruins. Now after a few games into the 2021 season the University of Ole Miss are now number 1 with a record of 3 wins and 0 losses, followed by the Arkansas Razorbacks, and the number 3 team is the Vanderbilt Commodores.