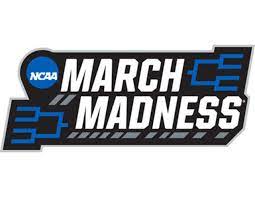 This is the March Madness Logo.

The end of the College basketball season is here. So that means the big tournament is starting. March Madness has started and there have already been a few upsets and small rank teams are making a run deep into the tournament. One of the biggest upsets of the March Madness tournament was the Loyola Chicago and the University of Illinois game. Loyola Chicago was ranked number 8 in their side of the bracket and Illinois was ranked number 1 and Loyola Chicago stunned the number 1 team Illinois 71-56 in the second round of 32 teams. Loyola Chicago led for about 38 minutes out of the 40-minute game. Another upset was number 11 Syracuse defeated number 3 West Virginia 75 to 72 in the second round of 32. Now it is Jim Boeheim’s 20th Sweet 16 as the Syracuse head coach. One of the best upsets this year was number 7 seed Oregon defeated the number 2 team Iowa 95 to 80. Iowa’s big man Luke Garza had 36 points in the loss to Oregon and that will be his final college basketball game at The University of Iowa.  The power 5 conference that has the most team in the 2021 March Madness tournament is the Big Ten conference. The Big Ten has 9 teams in the March Madness tournament.  There is always a tradition where fans would make a bracket for who they think would win the tournament and how each round would go and now there are very few perfect brackets in the world. Now there are only 16 teams left in the March Madness tournament and the Sweet 16 games are Saturday, March 27th, and Sunday, March 28th.

The traditional March Madness tournament has started and there have already been some upsets. There are only very few perfect brackets in the world left and now they are in the Sweet 16. The Sweet 16 starts on Saturday, March 27th, and Sunday, March, 28th.