Battle of the boyfriends- Gilmore Girls 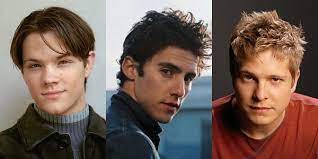 If you’re a fan of the show,” Gilmore Girls,” then you know how big the debate is about which one of Rory’s boyfriends is better. Each boyfriend is different and comes at different times of Rory’s life, so as I describe them, think of who you think is a better fit for Rory Gilmore.

But first, let’s tell you about Rory Gilmore herself. Rory is a highly intelligent young lady, who is on her way to an ivy league college. She loves to read and write and aspires to be a journalist. Rory never gets into trouble and is almost the opposite of her best friend and mother, Loreli. She loves to learn and she collects knowledge very easily. Most of the time, you can see Rory studying and reading a book. Or maybe she’s with Lane or at Luke’s diner. Rory is a very big perfectionist and throughout the show doesn’t receive very much criticism. Rory has been viewed as a very entitled and selfish character. Many even meet Rory’s character and watch her grow and are often confused at her life decisions. She gets big opportunities and folds very often. In the Year in the life series, Rory ends up bouncing around different people’s homes, without a job. All of this may rub off negative energy about her character, however, Rory’s character is also seen as quiet, sweet, and caring, with an introverted vibe. She has had an easy life so maybe she’s just figuring everything out. Overall Rory’s character is very smart and honest. But enough about Rory herself, maybe now we can meet her 3 boyfriends and see who’s a better fit for her.

When we first meet Dean, he’s the new kid in town after moving to Stars Hollow from Chicago. He’s tall and has dark hair. He likes a lot of the same music as Rory which is the main thing they have in common. Dean is very patient with Rory whenever she’s being stubborn or when she’s studying. However, he was kind of needy. Dean and Rory’s relationship started with a friendship and then eventually became more. They dated for 2 seasons and then that’s when Jess and Rory began. Dean got married at 18 to a girl named Lindsey, however, he cheated on her with Rory in season 4. Rory and Dean ended up dating again but not for long. Dean was very clingy to Rory and he always wanted her attention, however, Rory did kind of brush him off when Jess came around and she began to study way more at the end of their relationship. Dean revealed in the Reunion episodes that he had married once again and was having his 4th child. I think Dean wasn’t meant for Rory and vise versa. For me personally, Dean comes in 3rd place.

We first meet Jess when he comes to live with his Uncle Luke for the year. He has dark hair and is a decent height. Jess ends up failing high school his senior year, so he leaves right before Rory’s graduation to live with his biological father. Jess is a troubled kid at first but after you get to know his character, he becomes a great guy. Jess does everything he can for Rory and is very understanding. He avoids anything that could cause conflict between him and Rory. Jess and Rory have the most in common, including their taste in music, books, and more. He loves reading and is very smart but doesn’t like to show it or apply himself. He ends up writing a book and becomes a publisher. Jess shows his deep care for Rory the whole time they’re dating and after. We don’t see Jess with anyone else after Rory. Though he seemed like a bad influence on Rory, he ends up coming back for her several times apologizing and wanting her to be with him but she denies him due to her love for Logan, whom we meet after Rory goes to Yale. Jess and Rory just seemed right. He loved Rory and even in the reunion episodes he still had feelings for her but never admitted it. I think Jess was just misunderstood. Overall Jess is in 1st place for me.

The rich and daredevil Logan goes to Yale with Rory her first year, but he’s been there for longer. Logan loves anything that involves the word danger and gets hurt several times during the time Rory and Logan are together. Logan is very affectionate with Rory and seems to love her very much. He eventually proposed at Rory’s Yale Graduation. He becomes a businessman and makes a good name for himself, although his father was already somebody. Logan is charming and witty. Rory and Logan actually took a break one time and he apparently cheated on her because he thought they were broken up. They lacked communication issues and after Rory told him no when he proposed, the couple broke up. However, the engaged Logan finds his way back to Rory as they date once again in the reunion episodes. Logan and Rory had a bumpy relationship but it seemed promising. Logan was always there for Rory whenever she needed him and it only took a call. But sadly, he and Rory made a final split after Logan’s Fiance moved in with him. Overall I think Logan was too affectionate and was always putting himself in danger, but his care for Rory got him in 2nd place for me.

In the final seconds of the reunion, Rory tells Loreli she’s pregnant. They didn’t reveal who the father was but everyone assumed it was Logan. All 3 boyfriends had their good sides and bad but only one will be right for Rory in the end. With what I’ve given you, what do you think? Who is better, Dean, Jess, or Logan?