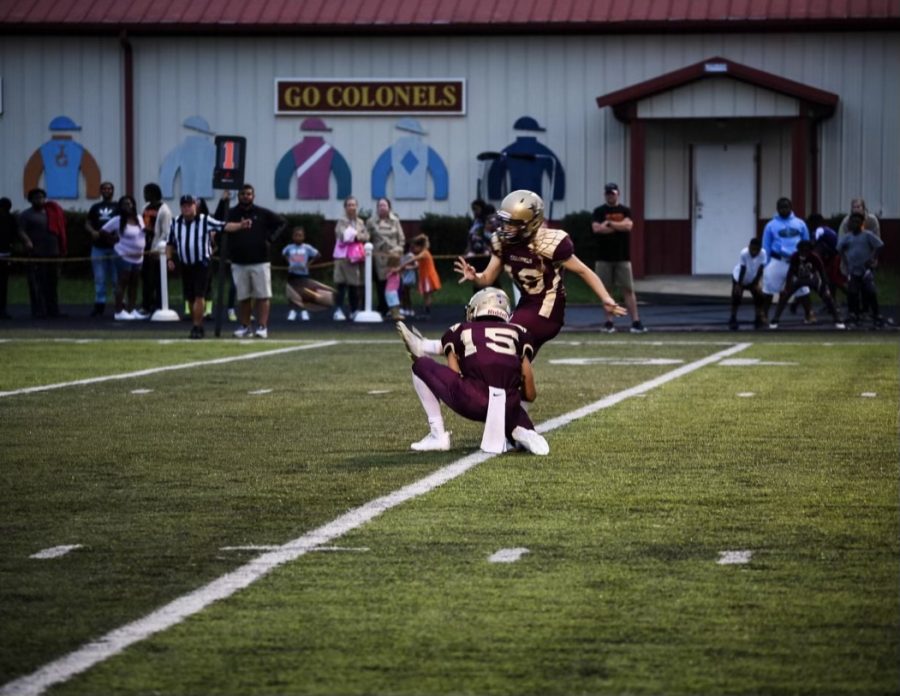 Makayla Pittman made history by kicking in the Bourbon v. Paris scrimmage on August 14, 2021.

Friday Night Lights took on a new meaning August 14, 2021, and not just because it was on a Saturday.
PARIS, KY. — The score was 14-0. The energy emitting off the players was impalpable. Every fan was on their feet in Adena Springs Field, greatly anticipating the next move. It was Pittman’s time to shine.

History was made that pivotal Saturday night when Makayla Pittman kicked three field goals for the Bourbon County Football Team. The crowd and student section erupted in cheers, despite the tension being high between crosstown rivals Bourbon County and Paris High School.

Nothing beats the feeling of accomplishing the unthinkable, and no one knows that feeling better than Bourbon County senior Makayla Pittman.

“Honestly I am still lost for words on how I feel, but I do feel proud. I also feel honored to be a part of this amazing team,” said Pittman.

Her resilience, athleticism, and determination become apparent in her performance. At Saturday’s scrimmage against Paris, the kicker racked up a total of three points on the scoreboard, officially making history as the first female kicker in Bourbon County.

Upon arriving at the stadium, Pittman was a bundle of nerves, but knew in her heart that she “wanted to make history that night.”

Before becoming a kicker, Pittman played competitive and school soccer for 11 years. Her soccer experience proved useful on the football field, as Bourbon County defeated Paris 29-8 in Saturday’s scrimmage.

Upon hearing news that the football team was in search of a kicker, Pittman eagerly reached out to Head Bourbon County Football Coach, David Jones, about fulfilling the position. According to Pittman, when she approached Coach Jones about playing, “he was absolutely thrilled” and wanted her “to be a part of the team right away.”

Pittman described that she “was all in from the beginning” and “no challenge came to mind” when she pondered playing football. All she knew was that she “wanted to make a difference.”

The kicker truly has a love for the game and is looking forward to a packed game schedule this fall. “My favorite part about being the kicker is that I get to score points not only for myself, but for my team and coaches,” she said.

Pittman is a true testament of the strength and courage it takes to make a difference in a traditionally male-dominated sport. The kicker’s impact on the Bourbon County community will be remembered for years to come.

“I knew I wanted to do something different unlike other girls, and I wanted to be the change and show women that they can do anything they can put their mind to,” Pittman said.

One of the biggest challenges Pittman has faced being the only female on the team is “trying not to let” her “emotions get the best of her all the time.” But on the field, Pittman focuses on being the best athlete she can be, rather than breaking barriers and debunking stereotypes.

As Pittman proved in Saturday’s Bourbon County v. Paris scrimmage and will continue to prove throughout the season, there’s no such thing as “playing like a girl.”