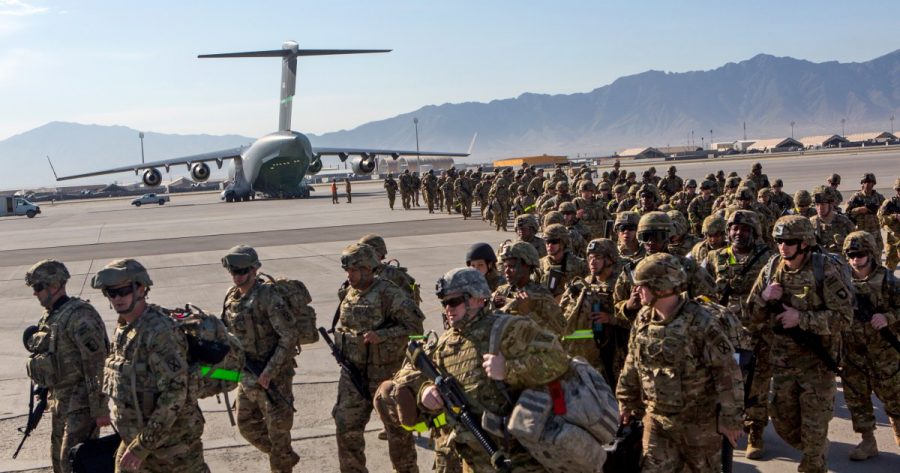 Soldiers from the U.S. prepare to leave Kabul, Afghanistan

Since the bombing of 9/11, and even before that we have been fighting in Afghanistan to protect citizens not only there, but across the whole Middle East, and the United States. Over that period of time, the U.S. spent over 275 billion dollars for ammunition to supply all six-thousand troops that were there. Over the past two decades, there have been four presidents in office including George W. Bush, Barack Obama, Donald Trump, and our current president, Joe Biden. Through each of their terms, they’ve helped to protect the United States and Afghanistan, but the realization of how dangerous it is over there for our military brought no other choice but to send soldiers back home. Since early July 2021, the Taliban has taken over Kabul Afghanistan, and doesn’t plan to surrender anytime soon.

The Taliban is “a fundamentalist Muslim movement whose militia took control of much of Afghanistan from early 1995, and in 1996 took Kabul and set up a radical Islamic state. The movement was forcibly removed from power by the US and its allies after the September 11, 2001, attacks.” Because we were ordered to leave the country, the Taliban seized their opportunity and took over Kabul, which has already caused many problems that we solved while there for twenty years. Their main goal is to completely take over the Pakistan government, which they have pretty much succeeded at. In the past month, Taliban fighters have executed twenty-two Afghan commandos which adds to several more executions that have happened. All women have lost rights, and “women aged fifteen through forty five who are widowed will serve as wives to the Taliban men.” Now, women, children, and men are fleeing for their lives and are counting on the U.S. for help.

What is happening over in Afghanistan is heartbreaking. To watch the news every night and see how many people are losing their lives, or being punished for everyday things that we’re allowed to do such as watch tv, have a free education, and all the basic rights that we have thanks to our leaders is depressing when you see or hear about it. This year will mark the twentieth anniversary of 9/11 which will be a very big thing this year. We all hope that the US and many of our allies will be able to help win Kabul back over and end this once and for all.