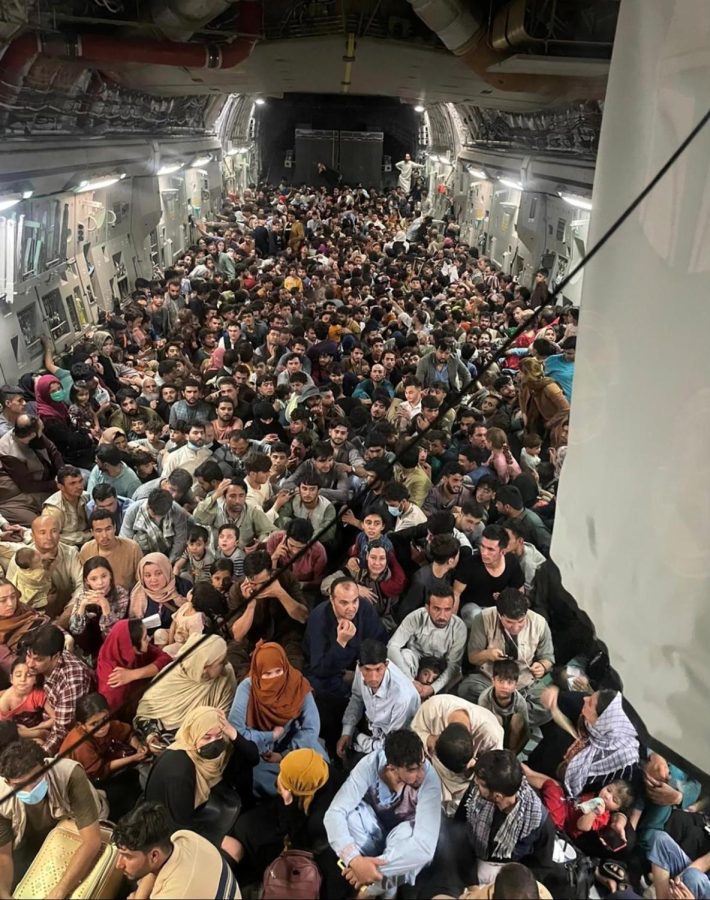 The Telegraph– US military cargo plane airlifting 640 Afghans out of Kabul.

September 11th, 2021– The first 9/11 in 20 years in which the U.S. will not have troops stationed in Afghanistan. The withdrawal of troops, starting after President Biden’s April 2021 announcement, coincided with the advance of the Taliban and the collapse of the U.S.-backed Afghan government. Chaos ensued as the Former President Ashraf Ghani fled to Turkmenistan on August 15th. The negotiated end-of-withdrawal date was August 31st, and was upheld as the last plane out of Kabul, the Afghan capital, left August 30th.

The withdrawal of troops in Afghanistan has been a controversial political topic for several years. Former President George W. Bush initially entered Afghanistan because of the lack of response from the Taliban to turn over Osama Bin Laden. After the destabilization of the Taliban, the goal then shifted into nation-building. After 20 years, the goal and purpose in Afghanistan have become continually less clear to voters, and therefore less supported. Former President Barack Obama initially claimed a “full withdrawal” of troops from the region, but ultimately 5,500 troops remained when he left office in 2017. Former President Donald Trump negotiated an agreement with the Taliban, to withdraw U.S. troops in exchange for the stop of attacks on U.S. forces. Current President Joe Biden addressed the nation August 31st, reaffirming the reason behind the withdrawal saying, “We’re left with a simple decision, either follow through on the commitment made by the last administration and leave Afghanistan or say we weren’t leaving and commit another tens of thousands more troops was the choice, the choice real, between leaving or escalating, and I was not going to extend this forever war.”  Ultimately, the war in Afghanistan cost the lives of 2,500 U.S. troops, an estimated 240,000 Afghans, and $2 trillion.

With the exit of the last U.S. troops, Senior Taliban leader, Anas Haqqani, claimed that the Taliban was forming a new government, which was “in its final stages.” He continued, saying that the government will respect human rights and women’s rights within Islamic law. There is much skepticism as to if the Taliban will truly commit to protecting humans and women’s rights, mostly because of the oppressive history of rights under Taliban governance. The newly established government will face pressure from the international community in upholding rights, as well as the withdrawal of foreign aid and funds.

Many regional experts are expecting a humanitarian crisis to unfold, and subsequently a major increase in asylum seekers, particularly by foot. Responses to this predicted influx have been mixed. Neighboring Iran and Pakistan have declined to take in Afghan refugees because of the current refugee crisis. Some European countries like Poland, Switzerland, Austria will also not accept refugees in an attempt to avoid the 2015 migrant crisis. Conversely, France and Germany have said they will support the resettlement effort. The United Kingdom has already committed to a scheme that would take in 5,000 people in the first year, and 20,000 in the coming years, prioritizing high-risk groups like women and minorities. Australia has committed to taking in 3,000 refugees, and Canada has committed to resettling 30,000. The U.S. has not committed to a specific number, but it has allocated $500 million to the “unexpected urgent refugee and migration needs of refugees.”

The end of the war in Afghanistan marked the end of the U.S.’s longest war. This war had been occurring for longer than the lives of many students. Many people of generation z have relatives or even parents who were directly affected by this war and will continue to be affected by the changes caused by the end of it.